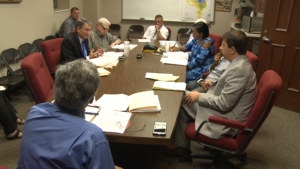 Jackson City Attorney Lewis Cobb, members of the Jackson Beer Board and the Jackson Police Department met with each business individually, including restaurants and convenience stores.

“With this being your first occasion, typically a fine is in order,” Beer Board chairman Charles Rahm said.

Owners for the Varsity Market on Oil Well Road and the Exxon at the intersection of South Highland Avenue and Carriage House Drive were fined $1,500 as first-time offenders.

Red Lobster was also fined $2,500 for illegally selling, and it must be paid within 10 days. This is Red Lobster’s second offense.

The Dollar General store near North Side High School had its license revoked for 12 months after its third offense, although the other offenses were under different management.

“I’m a little concerned with his lack of knowledge in regards to his employees,” Rahm said.

Two businesses had their cases tabled. The Gold Lion on the 45 Bypass and Bowling Express on Bowling Drive wanted to discuss their cases further.

The tabled cases will be brought before the board again July 11.