Rockabilly Gran Prix brings cyclists from across the Southeast

JACKSON, Tenn. — The Rockabilly Gran Prix will roll through the hub city this weekend celebrating its fifth year, attracting hundreds from across the Southeast. 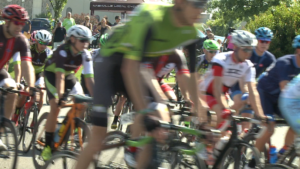 Saturday, some will race up to 66 miles down Windy City Road and Old Bells Highway. Then on Sunday, cyclists will be cheered on as they ride downtown.

“It’s like NASCAR on bikes, it’s a short loop, the racers come through every minute and a half to two minutes. You could be sitting at Rock ‘N’ Dough Pizza and see all the race,” race director Matt Joiner said about Sunday’s criterium.

Organizers say this weekend, there’s a race for all skill levels of cyclists.

“We have first time racers to one of our first winners, who is racing in the highest level so of cycling in Europe right now,” Joiner said.

Joiner said there will also be a live band at Sunday’s race, and it’s a great event for your whole family.

Organizers say if you can avoid Windy Cindy Road and Old Bells Highway Saturday morning, it would greatly help the safety of cyclists and the flow of the event.

Streets will also be shut down in the downtown area Sunday for the race.