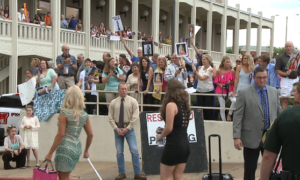 JACKSON, Tenn —  An event that comes around once a year but draws one of the largest crowds to the Jackson area, The Miss Tennessee Scholarship Pageant. The pageant has a long and rich history in Jackson, but don’t forget about the many fans cheering the contestants on from the sidelines.

36 ladies are competing for the title of Miss Tennessee 2017. There’s only one person who can take home the crown, but hundreds of supporters.

“We’re actually here for our daughter Nicole Dolton she is contestant #8 from east Tennessee in Kingsport,” supporter Beverly Dolton said.

All week family members of contestants and fans have been getting pumped up for the Miss Tennessee Scholarship Pageant.

One fan, Maddy Harris said, “I’ve gone every year for a really long time and I just love watching everybody and I’m in pageants myself so I like coming to watch the older girls do it.”

With the competition underway many are excited to see who will take home the crown.

“Oh, honey I don’t know,” supporter Betty Adkisson said “Talent was so good last night so I don’t have a clue.”

“Usually I have somebody picked out but I don’t,” Harris explained. “I like Miss Shelby County, I think she’s really pretty.”

Some attendees said it’s important for the community to support the girls all week long.

“They have committed so many hours in community service work and it’s just a fantastic opportunity to support the next generation,” Snipes said.

There are also those who take part in getting the ladies prepared for the big night like Adkisson who alters some of the dresses. “Sometimes it’s hard because they want to get those with all the bead work on it and sometimes its hard but I get it done,” Adkisson said.

Fans and supporters can also take part in the people’s choice award by voting at the Carl Perkins Civic Center or online. Voting ends Friday night at 8 p.m.

The final night for preliminary competition is Friday night beginning at 8 p.m. at the Carl Perkins Civic Center.