Keli’s Farewell: The guys tell all

JACKSON, Tenn. — This is Keli McAlister’s last week with WBBJ 7 Eyewitness News. Every night this week we will take a moment to recognize her. 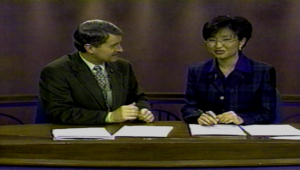 “We all kind of think of Keli as our work mom in a little bit of a way,” WBBJ 7 Eyewitness News Chief Meteorologist Tom Meiners said.

Keli’s co-workers tell all as the veteran journalist prepares to sign off for the final time on Friday. “She was a member of the same sorority as my daughter,” WBBJ 7 Eyewitness News Anchor Tom Britt said.

Britt hired Keli right out of college in 1996. “She had that whatever magic that you have to make it in this business,” he said.

Keli started out reporting then eventually went on to anchor the 6 p.m. news with Britt. “It was always funny because we would anchor the first block and then we would go to a break and then we both would yawn simultaneously,” Britt said.

WBBJ 7 Eyewitness News Anchor Brad Douglass has also worked with Keli for many years. “She’s a lot of fun,” Douglass said. “She has a sense of humor and is wonderful to work with her and has been ever since I’ve known her almost now 20 years.”

Meiners most recently joined the evening team. He said Keli is extremely down to earth. “She’s also kind of a little bit silly, and that’s like one of I think her best qualities,” Meiners said.

Keli is a great journalist now taking on a new challenge. Her last day with WBBJ 7 Eyewitness News is Friday, June 23.