Families enjoy Independence Day at ‘Festival of the Lakes’ 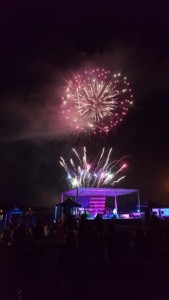 LEXINGTON, Tenn —  Many people across west Tennessee celebrated the holiday on or near the water. Hundreds to thousands of people came to Henderson county for the annual ‘Festival of the Lakes’.

“We come out and have a good time bring my family out set up under the shade have a little BBQ and just kind of enjoy everybody else.” Attendee, Johnny Williams said.

“Have a tent setup where I am taking pictures with anyone who wants to take a picture for a small donation to Children’s Miracle Network.” Davis said.

Some families said the festival brings people of all backgrounds together to celebrate as one.

“Kind of a unity thing you got all ethnics of people out here mixed races and stuff it seems everybody gets along an have a good time.” Williams said.

It was a very hot and sunny fourth of July down at Beech Lake, sending many attendees down by or into the water.

“We love the swimming and we just love watching all these boats and everybody getting together having a good time.” Attendee, Lane Klutts said.

While many people enjoyed a day out on the lake some said the real excitement came at the end of the night.”

Attendee, Gloria Williams said “The fireworks at the end. it’s just a beautiful experience watching all the different lights over the river.”

There was also a BBQ cook off during the day. The grand champion was the Midnight Riders from Cordova, Tennessee.