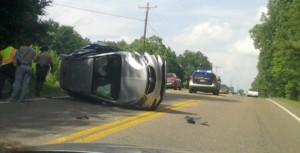 Viewers first told us about the wreck around 4 p.m. just south of Spring Creek and north of Ashport Road.

According to the Tennessee Highway Patrol, there were two vehicles involved in the crash, with no serious injuries.

One man said he heard the crash from his house and jumped into action, along with others to help get the victims out of the cars.

“Well I’ve been in an injury. I was hit, head-on by an 18 wheeler in 2014 on Christmasville Road and that just made me spring into action right then and there because I was trapped in my car for about 45 minutes,” said William Chatman, who helped rescue the crash victims.

No word if any charges will be filed in the crash, which remains under investigation.