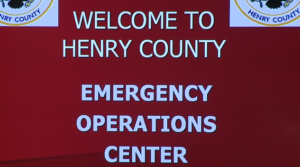 “The plan is actually identifying certain hazards that our community is vulnerable to and identifying those and making recommendations on things we can do in the community to lessen the effects of those hazards to our community,” Henry County Emergency Management Director Ron Watkins said.

Thursday’s gathering was led by a representative from the Tennessee Emergency Management Agency. He told local officials how this plan will help the community by protecting local residents against natural disasters such as fires, flooding and severe weather.

“Earthquakes are also very high on our list since we are so close to the New Madrid Fault Line,” Watkins said.

Nothing for the plan has been officially determined yet. In recent years, the community has been kept safe thanks to federal grants.

“Henry County has been successful in more recent years in applying for those grants to provide tornado safe areas in our schools,” Watkins said.

There are some ways they plan to keep residents safe. Those include relocating people who are in areas prone to flooding. Others are much simpler.

“It might be as easy as screwing a bookcase into a wall or putting a flex pipe on a gas pipe to your gas and water heater,” Watkins said.

The group will meet once a month for the next three months until they send their plan off to be approved. The next meeting is scheduled for Aug. 24.