JACKSON, Tenn. — The mother and daughter charged in connection with a deadly stabbing in west Jackson faced a judge Thursday. 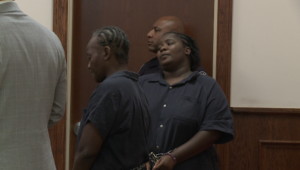 Ebony is charged with second-degree murder, accused of killing Kelset Price, 34, June 21 at a home on Glendale Street.

The judge lowered Vernetta’s bond to $15,000. She is charged with tampering with evidence.