JACKSON, Tenn. — Thirty-five Kmart stores across the country are closing this year, including the one here in Jackson. 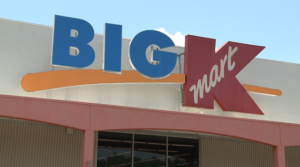 Jackson residents found out Friday that the Kmart on Old Hickory Boulevard is closing. It’s just one of 35 Kmart stores scheduled to close this year.

“It’s a little sad and disappointing,” Barbara Warren said. “It means a lot of people are going to lose their job. It’s a great place to shop, and it’s going to be sad to see them close.”

One local man has been going to the local Kmart for years.

“It’s been here since I was a kid. I still shop here,” Lonnie Crow said. “I still come buy things here. I work for the local dairy here, and we service them. It’s kind of sad.”

The Jackson Chamber of Commerce said the closing of this store will impact Jackson, but they did not see it as a surprise.

“The retail industry is changing across this country, and Kmart and Sears, that has been a group that has been closing stores all across the country, and eventually that was going to hit Jackson,” Jackson Chamber President and CEO Kyle Spurgeon said.

Margie Golden says these closing don’t just impact the people that work there but also the town as a whole.

“So it makes us think, you know, I don’t know what’s becoming of our town, city,” Golden said. “We’re just going to have to pray. That’s the No. 1 thing to do.”

The store is set to officially close in October.