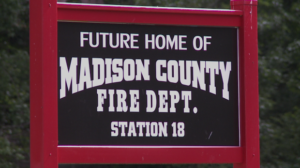 A plot of land on Law Road between Interstate 40 and Highway 412 East will eventually be home to Madison County Fire Station 18.

Joshua Goff works at a business nearby. “Glad they’re moving in,” he said. “They’re close. That means we need them, they’re here.”

Madison County Fire Chief Eric Turner said this additional station will help cut down on response times. “If you can get a fire station closer, obviously we can get fire trucks on the scene quicker,” he said.

Turner said right now some property owners in that area are paying higher insurance premiums because they do not live within five road miles of a fire station. He said the addition could save them money. “A lot of those folks, their insurance ratings will drop once we get that building built,” he said.

Turner said the community will have to raise about $60,000 to pay for the actual building. He said Madison County will pay for two trucks at the fire station. Turner said they already have a tanker and the county has approved about $260,000 for a pumper. “Time the building’s built, we’ll have the equipment,” he said.

Volunteer firefighters will work out of the station. Goff said he cannot wait for them to get moved in. “If something was to happen, God forbid, the fire department’s next door,” Goff said.

Once completed, this will be Madison County’s 18th fire station.