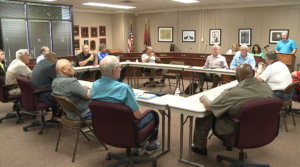 JACKSON, Tenn — Now that the city council has made a change to the sales tax agreement plan the county and school board will have to vote again on approving that plan. Tuesday night, school board members and county commissioners met to discuss the change and what will happen next.

The hot topic of the Education Vision committee was creating ideas to help the county come up with their half of the $12 million the city originally gave to the school system.

School district officials and county leaders are in the “talking” stage of a plan of action to secure $6 million in education funding.

County commissioner Larry Lowrance said, “Anything that we have in mind to do we want to run it by them first to make sure their completely good. We have a good partnership here between the county commission and the school board and we want that to continue.”

Lowrance brought up the idea to reduce the amount of funding the county is required to give to the school system each year.

“The money we gave last year technically we could reduce that about $350,000 this year. No plans on doing that,” Lowrance explained.

Lowrance said if it was reduced it would only be for one year, but school officials said losing more than a quarter of a million dollars will hurt them drastically.

School board member Wayne Arnold said, “We’ve come up with what we feel is a very tight budget this year so any additional cuts will really impact us severely.”

“The number that was shared here (Tuesday) night was like $327,000, that’s a significant amount to us,” board chairman, Bob Alvey said.

Some county commissioners said their almost certain the $6 million will come from raising property taxes and introducing a wheel tax, but commissioners are also looking at any possible reductions to the county budget.

“With 6 million dollars less to have to spend, then you got to go back and look at how you’re spending it again,” Lowrance said.

Although the city council voted to keep ownership of school buildings within the city limits, Alvey said he believes it is a plus for both the school district and the county.

“It takes that funding burden off the county which that could have impacted our capital.”

The school board will consider the changes to the tax agreement plan and vote on it Thursday night. Alvey said because the changes do not considerably affect the school system he is confident the board will approve the agreement again.

The Madison County budget committee will meet Wednesday at 11:30 a.m. Commissioner Larry Lowrance said they hope to make a recommendation later this week.