JACKSON, Tenn. — Jackson Christian’s Sophie Dunavant is all business when it comes to softball. 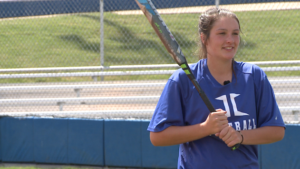 “I can cut up, but when action starts to go on, then I’m serious,” Dunavant said.

You can tell that by her numbers. She had a batting average of .528 while slugging 10 home runs.

But her success at the plate comes from the work put in when no one is watching.

“Every weekend I’m changing something about my swing,” she said. “I’m working with my dad on trying to make it better.”

Dunavant picked up the game at age seven, and before she knew it, she was hooked.

“I love it because it’s fun to get out here and be with friends and then just compete,” she said.

Competition is something Dunavant excels in, making every pitcher dread facing her. In 140 at-bats, she only went down swinging seven times. But even that number is too high for her, she says. 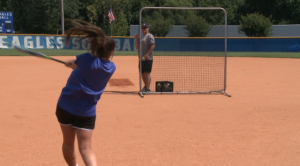 So after a swing and a miss, she regroups and then gives herself a pep talk.

“I’m like, ‘gosh, come on now,’ then I get focused and keep my head down and make sure I’m doing everything right,” Dunavant said.

In two at-bats against WBBJ 7 Eyewitness Sports anchor Ahmad Hicks, Dunavant would have reached base on the second pitch in the first at-bat.

Ahmad made her work on the second at-bat, working his way to a 3-2 count before she lined one back up the middle.

In the end, Ahmad could not strike out Dunavant.

After high school, she hopes to continue playing softball in college.