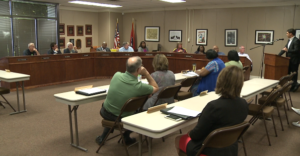 Board members conducted a re-vote on whether to approve the city and county’s sales tax agreement plan, and discussed obstacles the school district is facing as the school year approaches.

With a unanimous vote, school board members re-approved the city and county sales tax agreement plan. Earlier this week, the Jackson City Council voted to make an amendment to continue ownership of schools buildings in the city limits.

Board Chairman, Bob Alvey said, “For us materially I think actually it’s an advantage for that section not to be in there in terms of impact on the county’s ability to fund capital. So I don’t think anyone on our board had any concerns at all about that.”

Also on the agenda, a big concern about teacher vacancies. Dr. Jones presented a report which showed 21 open positions across the district.

“The biggest issue is going to be in math,” Dr. Jones said.  “So anyone that has a math certification, don’t forget about Jackson-Madison County Schools.”

There are 3 vacant math positions at Liberty Technology Magnet School. “Liberty had a little turnover in math so they have an area of concern in the math department so looking for math teachers that are highly qualified and certified,” Dr. Jones said.

English language arts and Spanish are other positions school officials are worried about. Dr. Jones brought up a suggestion during the meeting to expand classrooms until the positions are filled.

“Possibly maybe rearranging our schedule in order to best accommodate the needs of our math department.”

Dr. Jones said lowering the amount of vacancies is one of his main goals for the school year. “Making sure we’re really able to start the school year having everything staffed and ready to go for our children.”

School leaders said they’re looking for highly qualified teachers in every classroom. If you would like more information about the hiring process click here.

The school board is scheduled to meet again next month.