JACKSON, Tenn. — Officials say Madison County has not raised taxes since 1992. That changed on Monday. 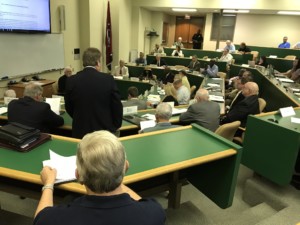 In a 17-7 vote, the Madison County Commission voted to raise property taxes 30 cents per hundred dollars of the assessed value for the first time in decades.

“They take $6 million away from our kids knowing the county is going to have to replace most of that,” said one commissioner during the tense meeting.

Commissioners say they had no choice but to implement the new higher tax.

“We were forced to do that by the city reneging on an agreement,” Madison County Mayor Jimmy Harris said.

“Nobody wanted to do what we had to do, but based on the city’s actions, based on the fact they removed $12 million from the sales tax funds that was supposed to go to the schools, they chose to take that back,” Madison County Commission Chairman Gary Deaton said.

During the meeting, one commissioner proposed taking $2 million from the fund balance and only raising the property tax 20 cents, but that was voted down.

“Rather than coming back next year and not having raised enough and raise it again, we just didn’t feel like it was appropriate,” Deaton said.

The county commissioners are also looking at implementing a $75 wheel tax. That decision will be voted on during a special election for county residents next May.

“If it’s approved, we will reduce the property tax according to the amount of funds raised through the wheel tax,” Deaton said.

“The wheel tax is a more fair tax because the cost to fund the school system is beared by more people than just the property owners,” Mayor Harris said.

Officials say although damaged, the relationship between the city and county will move forward.

“We represent the same people, so we will have a relationship,” Mayor Harris said. “The relationship will be different than what it has been in the last 10 years.”

The change in property taxes will go into effect immediately.