Cavaliers will be experienced in 2017

ALAMO, Tenn. — Returning to action after a year off is Crockett County head coach, Kevin Ward, as he’s fully recovered from open heart surgery.  But not only does the head coach return, so does about seven or eight players on both side’s of the ball Ward says.  Experience is always a good thing to have when trying to make a deep run, and he thinks this group is capable of doing just that.

“We’ve got a lot of our team from last year returning, I don’t know if that’s good or bad, we won three games last year so we’re really working on the small things that will help execute for the big things,” Ward says.  “I feel like we got the talent to have a good football team, and have a good season this year.” 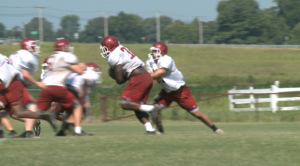 But Ward isn’t the only one returning that missed an entire season, running back Jordan Branch makes his return after missing last year due to a lower leg injury. The 6’4 255 running back has picked up seven offers prior to his senior season, so having a talent like that back in the line up is always a good thing according to Ward.

“I’ve been an assistant coach where we’ve had D1 players and he definitely fits the bill,” Ward said.  “He has speed, he has strength, size, very agile and light on his feet and he loves the game so you put all those things together, you know normally that’s a D1 type kid.”

The Cavaliers open up the season against the Dyer County Choctaws.