WEAKLEY COUNTY, Tenn. — The driver of the SUV that slammed into a house near Greenfield early Wednesday morning now faces criminal charges, according to the Tennessee Highway Patrol. 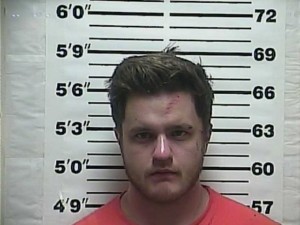 Troopers identified the driver as 20-year-old Eric McCartney. He is charged with two counts of reckless endangerment, DUI, underage consumption, and burglary, according to the Weakley County Circuit Court Clerk’s Office.

The homeowner, Kristofer Smith, said an SUV crashed into his house on Highway 54 near Greenfield around 3 a.m. Wednesday while his wife and three children slept inside. Smith said the SUV plowed into the bedroom his twin 4-year-old boys share, destroying nearly everything in the room except their bed.

He said the boys were in another bedroom with their mother at the time.

Smith said the driver hit another vehicle then kept going up a hill and eventually hit the house. After the crash, he said the driver got out, went into his house and got a drink of water.

A trooper said he smelled “a strong odor of intoxicant about his person” while talking with McCartney, according to an affidavit. “He was very unsteady on his feet and was talking with slurred speech. He was given field sobriety tasks and performed them poorly,” the affidavit states.

McCartney was arraigned Wednesday, according to the clerk’s office. He is currently free on a $5,000 bond.