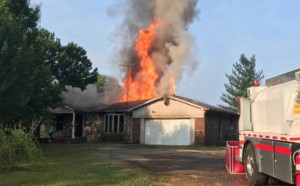 The black smoke was so strong it could be seen for miles.

Chester County Fire Chief Jim Vest says nobody was inside the home at the time the fire started. He says it was a tough battle trying to put the flames out.

The owner of the house watched the home she says she has owned for decades go up in flames, destroyed.

Several agencies responded to help fight the fire including Chester County and Milledgeville fire departments. They brought in their water tankers to help.

Every time the fire seemed to die down, the flames quickly rose back up.

Firefighters were constantly bringing in tankers filled with water due to the rural location of the home.

EMS was on scene and checked out one firefighter. We are told he is OK.

Hours into the fight with the flames a rainbow appeared. The homeowner says she believes things will be OK.

Officials have not said what started the fire.