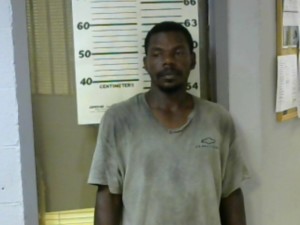 HUMBOLDT, Tenn — Nordeal Salter is being charged with armed robbery, among other things, after leading police on a chase through several counties last night.

Humboldt police received a call of an armed robbery Friday night at the Family dollar on Central Avenue. When officers arrived, they found Salter’s car and attempted to stop him but he drove off.

Police followed Salter through several counties in Tennessee before they arrested him in Fulton, Kentucky. The car salter was driving had also been reported stolen from St. Louis, Missouri, after a car jacking.

Salter’s charges also include aggravated assault, theft of property and felony evading in a vehicle. Police are still investigating and salter could face even more charges.

The Humboldt Police department is investigating an armed robbery.

Chief of Police, Rob Ellis confirmed it took place late Friday night. The incident led police on a a car chase, before catching the suspect.

Investigators say more information will be available later today after charges are finalized.

Stay with WBBJ 7 Eyewitness for the latest on the investigation.