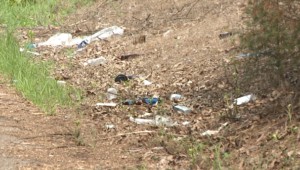 HARDEMAN COUNTY, Tenn —  A growing concern for illegal dumping in Hardeman County, but county officials are cracking down and targeting those who are responsible.

One resident, who did not want to be identified, said illegal dumping happens just feet away from his house. “They just throw a bunch of junk up here garbage sacks at the end of the road right up here on the left at that curb.”

County officials recognize it is a problem and are combating the issue. Court documents show Solid Waste Director, Kenny Brown, issued two warrants within the last few weeks for people suspected of littering. Jeremy Young was charged with criminal littering for trash left on Knepp Road. According to court papers, the trash appeared to be in excess of five pounds.

A concerned neighbor said, “It was ugly and it smelled bad. It sure did, it sure done that.”

Also, Lemarcus Walker was charged with aggravated criminal littering for allegedly having more than 50 pounds of trash in a non-disposable area.

Some residents said they are tired of seeing eyesores in the community. “I had to haul mine off they should haul theirs off, ain’t that right?”

If someone is caught illegally dumping their trash the person is subject to being fined and arrested. If you notice someone dumping trash illegally, contact the Hardeman County Solid Waste Department.