Bible verse to be removed from police station over religious controversy

A nonprofit organization that promotes the principle of separation of church and state has been on the move to stop those who they feel are violating that concept.

KNOXVILLE, Tenn. —  This is the second time reports have surfaced within the last week that the Freedom From Religion Foundation has taken action against state facilities that have displayed religious references on them. Some support what the organization is trying to do, while others say religious freedom is a part of American history. 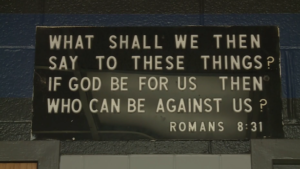 A plaque with a Bible verse from Romans 8:31 hangs in the Knoxville Police Department, but not for long. Police officials received a letter from the East Tennessee chapter of the Freedom From Religion Foundation that says the plaque is unconstitutional.

“Seems like a shame that they would want to be putting that much time and effort into doing something that’s really been a good thing,” Campbell Street Church of Christ Pastor Danny Sorrell said.

Pastor Sorrell says religion is a part of history. “Our country was founded on a Christian heritage, and there’s so much that we can gain from and learn from our past and learn from God’s word.”

The Knoxville Police Department is not the only government facility that has received a letter. The nonprofit also contacted Henderson County Mayor Dan Hughes last month about a Bible verse engraved outside the courthouse.

“Having a Bible verse on the courthouse, that’s not imposing anyone’s religion on anyone else,” Pastor Sorrell said. “It’s just part of the history of our country.”

WBBJ 7 Eyewitness News was unable to reach a representative from the foundation Wednesday, but this is what their attorney told us the last time we spoke about this issue.

“By placing a Christian verse on a government courthouse, that is abridging the government’s duty to be neutral, and that violates the establishment clause of the first amendment,” said Rebecca Markert, attorney for the Freedom From Religion Foundation.

Pastor Sorrell said although some may have different views, it is important to always be respectful. “[We] need to respond as Christ would, and we need to respond in love and not respond in with any kind of malice or anger or anything like that.”

An online petition to keep the plaque was started early Wednesday. By 11 o’clock that night, the petition had already surpassed 1,500 supporters.

According to Knoxville city leaders, the plaque at the police department is scheduled to be taken down Friday morning.