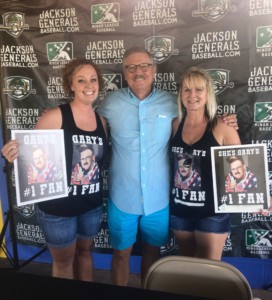 But the legacy he left will not be forgotten, and hundreds came out to the Jackson Ballpark celebrate him.

“We had people here at 2:00 today wanting to come in and pick their seats out and had special shirts made for Gary Pickens,” he said.

“The Generals called me and said, ‘Hey, we’d like to do this day for you,’ and I said OK.”

He even got to throw the first pitch.

The first 500 guests that walked through the gate were lucky enough to take home a “Gary said it would” umbrella.

Gary said the night wasn’t just about him, and has a special message for those who watched him over the years.

“I just want to say thanks to the folks in West Tennessee,” he said. “They’ve been really nice during all this retirement stuff.”

We asked Gary about how his retirement is going so far, and he says he’s been having fun doing some traveling.