It’s a wish 15 year old Dakota Barker has wanted for so long. A zero turn lawn mower he helped design custom made from scratch through the help of the Make-a-Wish Foundation. 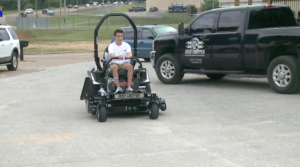 “I just wanted a lawn mower, but this experience definitely changed my life,” said Barker.

Dakota has been suffering from seizures since he was 8 years old due to epilepsy, until last December when he went in for the first of four brain surgeries at Vanderbilt Hospital to remove the areas that causes them. Since February of this year, his mother Krystal Barker said he’s been seizure free.

When presented with the opportunity from Make-a-Wish, Dakota was at first a little reluctant saying there are others who deserve it more than him, but he eventually warmed up to the idea.

Make-a-Wish reached out to Dixie Chopper to see if they can provide something he’s been passionate about since he was a little boy, a lawn mower, an experience they were happy to make happen.

CEO of Outdoor Specialties Clint Sanders, who is also Dakota’s pastor said, “Knowing Dakota since has born and seeing all the troubles through his sickness and his illness and then to be able to see him come as far as he has. Now he’s actually running track.”
Dakota said he plans to eventually open his own lawn mowing business someday in the future.
Categories: Local News, News
Share this...