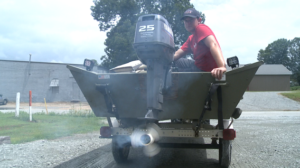 “It’s used for major disasters, major power outages, or a long term scene of some type where they needed electricity and power in a remote area,” said Graves.

He also did a walk-through of this mobile command post, making sure all connections were clear.

“We have pretty much communications with anybody locally as well as state,” Graves said. “We can talk to sheriff’s departments, fire departments, rescue squads, ambulance services.”

It may not be raining yet, but the cloudy skies above remind us how unpredictable West Tennessee weather can be.

That is why Chief Cathey of the Gibson County Fire Department says it is important to be ready for anything.

“About a month or so ago, we had around four inches of rain in less than an hour one Sunday afternoon,” Chief Cathey said. “So it don’t take it long to change at all.”

We went with Chief Cathey as he checked the engine on the Brazil Fire Station rescue boat. 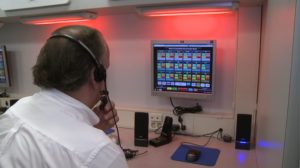 “We make sure at least once a week all of the motors are started,” Chief Cathey said. “So they’ll start first or second pull as soon as we get them.”

Everything seemed to be in working shape Monday, but Chief Cathey says they are inspecting rescue equipment they hope that they will not have to use. 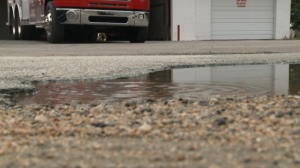 “Don’t drive through the water,” Chief Cathey said. “Turn around, don’t drown because very little water can sweep you right off the road.”

Gibson County representatives say it is always good to be weather aware and check the forecast before making plans.

They say if you ever find yourself in a dangerous driving situation due to the rain, pull over until you feel safe or call 911.