More than 2 decades ago a 14-year-old Milan girl went missing from her home. Wednesday night family members gathered for a candlelight vigil in her honor. 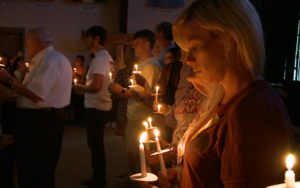 MILAN, Tenn — The years have come and gone since Cayce Lynn McDaniel was last seen by her family. She vanished from her home 21 years ago. Although this time of year is difficult for Cayce’s family, they pulled together to honor her name.

A somber day as many remember the anniversary of Cayce Lynn McDaniel’s disappearance. The family of the missing girl hosted “Candlelights for Cayce”.

“Candlelight is just showing that this community is together and we’re honoring Cayce and trying to come together to find an answer,” Cayce’s cousin, Lucas Smith said.

A local church, The Vineyard, volunteered their building to host the vigil. “We’re always wanting to help the hurting and the broken,” Teaching Pastor of The Vineyard, Larry Eddings said. “So it was a perfect situation to help them out.”

Family members say Cayce was last seen August 16, 1996. They said she was dropped off at home by a chaperone after church that night. Cayce’s best friend, one of the last people to see her, spoke at the event.

“She said, ‘see you tomorrow’, and that was that,” Cayce’s best friend, Amber Henson said.  “If I could turn back time and know that would’ve been the last time that I would see her or talk to her.”

Family members said having a vigil in Cayce’s honor can hopefully help them find answers.

“We just want more people to remember her and hopefully bring something of it,” Cayce’s cousin, Lindsey McDaniel said.

Smith said he only has a few memories left, but of what he can remember he holds close to his heart.

“I looked at pictures and things come back to me. I just remember Cayce being always laughing and keeping everybody up, smiling just selfless personality,” Smith said.

Family members said they hope this is the last time they will have to light a candle in her honor.

Milan Police Chief Bobby Sellers, along with other officers, attended the event. Chief Sellers said over the past 21 years, the police department has never stopped searching for Cayce.

If you have any information on the disappearance of Cayce McDaniel, or her whereabouts, contact Milan police at (731) 686-3309.