JACKSON, Tenn. — While U.S. Rep. David Kustoff addressed a small crowd Wednesday inside the Jackson Country Club, those wanting to speak to him chanted and protested outside. 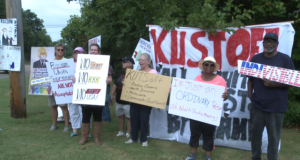 It happened at the corner of North Highland Avenue and Vann Drive.

“We are calling on Representative Kustoff to call out Donald Trump,” Doris Black said.

The nonviolent group Indivisible Jackson says they have issues with some statements from the representative of the 8th Congressional District.

They are also concerned with the recent attacks in Charlottesville.

They stood in the heat, but they say it’s worth it.