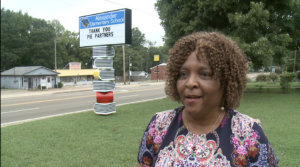 Staff and students welcomed and thanked the Pie Partners who made the sign possible.

School leaders say this is the school’s first marquee sign. They say it’s a new way to help keep the community informed and involved while keeping in touch with parents.

“Phone numbers change and they forget to tell us to update them in our system, and so when we call them doing an all-call to inform them of what we’re doing, we don’t really reach all of them,” Principal Carolyn Caldwell said. “By having a marquee sign, we are able to post on that sign what we’re doing that’s important for them to know about.”

Principal Caldwell said for their open house they made calls to all parents but were only able to reach about 100 of them. However, because of the new sign saying “open house,” she says they had a full house.