JACKSON, Tenn. — It was busy Wednesday evening for the Multi-Jurisdictional Violent Crime and Gang Task Force. 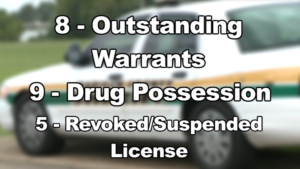 In less than 24 hours, two dozen people were arrested during a special operation in Jackson and Madison County. Five guns, nearly 100 ecstasy pills, marijuana and cocaine were also confiscated.

“Anytime you can get guns and drugs off the street, it’s a good thing,” 26th District Attorney General Jody Pickens said. “Guns, we know, take lives. So we look at an opportunity to take a gun off the street as potentially saving a life, or a multitude of lives.”

According to Jackson police, the operation included traffic stops and warrant checks in high-crime areas known for gang activity throughout the city and county.

This operation wasn’t just conducted by officers in Jackson-Madison County. Departments across Gibson, Hardeman and Crockett counties assisted along with the Tennessee Department of Correction who made more than 30 parole compliance checks.

The Tennessee Bureau of Investigation, Tennessee Highway Patrol and the U.S. Marshals Service also helped with the sweep. Of the 24 arrests, there were eight arrests for outstanding warrants, nine drug-related arrests and five made for driving on a revoked or suspended license.

Pickens says the forward thinking of this task force is an attempt to address crime in our area.

Pickens said no one was injured during the special operation.