JACKSON, Tenn. — Four women from California are behind bars in West Tennessee after the Madison County Sheriff’s Department found several bags of drugs after pulling over their car.

“It’s good news anytime we can find this and keep it off the streets,” said Tom Mapes, a spokesman for the sheriff’s department.

Officers noticed a car driving erratically near the area of the Highway 45 Bypass. That’s when they stopped the car at the Waffle House parking lot.

“It was a great amount more than what we would normally see,” Lt. Luke Finney said.

Court documents say all four of the women are from California.

Lt. Luke Finney said the bags were confiscated and the suspects were taken into custody.

“They are currently under investigation for narcotics,” Finney said.

Mapes said they were assisted in the search by their K-9 unit. 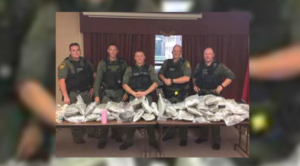 “We’re very proud of him because he helped yesterday in the investigation and discovery,” he said.

Thanks to his team, more drugs are off the streets in Madison County.

“It’s amazing how much is going on when you stop and think of this increased drug activity,” he said. “We’re trying to do all we can to slow it down and stop it.”

The four women are being held in the Madison County Jail, each in lieu of $30,000 bond. They are scheduled to appear Oct. 3 in Madison County General Sessions Court.