Group gathers to remember victim of 1886 lynching in downtown Jackson

MADISON COUNTY, Tenn. — A group gathered outside the Madison County courthouse Friday evening to commemorate a woman who was killed there more than 130 years ago. 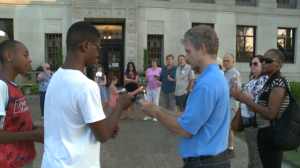 In 1886, an angry mob forcibly removed Eliza Woods from jail and lynched her from a tree in front of the courthouse.

She was accused of poisoning her mistress but was later found to be innocent.

Dr. Cindy Boyles, founder of Indivisible Jackson, says this is a perfect time to show people how important it is to be united.

“The main message of today is that, let’s recognize our past, and let’s focus on our future and go forward together,” Boyles said.

Speakers say, along with Eliza Woods, two others are recalled to have also been lynched over 100 years ago in Jackson. The group lit candles and remembered those and anyone who faces discrimination.