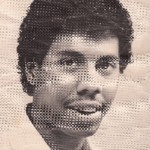 Michael was the eldest son of the late Jesse and Ruth Avent.  Born and raised during his adolescent years in Chicago, Illinois, he attended private Catholic Schools through his eighth-grade year, graduating from Sacred Heart School in 1967.  He went further to attend De La Salle High School his Freshman and Sophomore years.

Moving to Jackson, Tennessee in 1969, following the passing of his father, Michael became a part of the final class to attend Merry High School his Junior year.  His Senior year, he attended and was amongst the first class to graduate from Jackson Central-Merry High School in 1971.

Michael attended Jackson State Community College where he studied Basic Studio Operations and Communication.  Prior to moving to Memphis in 1973, he married JoAnn Key and they were married for a number of years.  To this union, a daughter, Maj Angela Rose, was born who passed shortly after her birth in 1981.  Upon arriving in Memphis, Michael worked at WHBQ as the first African-American cameraman.  As a cameraman for the Station, Michael had the privilege of meeting and befriending many celebrities such as Ruby Dee, Tina Turner, Ozzie Davis, Natalie Cole, and many more.  Michael also pursued modeling and was in a successful advertising campaign for The Magnificent Curl. The ad was featured in Essence, Ebony, and Jet Magazines in 1981.

In 1986, Michael relocated to Los Angeles, California and held many other positions in the Audio/Visual field and as a Teacher at Nora Sterry Elementary School. Michael had three god-children: Lamont, Donnie, and Brian Beshears of Moreno Valley, California.

Returning home after the passing of his mother, Michael affiliated himself with People’s Choice Church, pastored by Gloria Jean Cole.  He was ordained Deacon in 2007 and was a major asset to that church until he his medical situation prevented him from continuing his mission as a deacon.  His medical condition left him unable to reside on his own; thus, he resided at Maplewood Healthcare for the next six years until his fatal stroke occurred on August 14, 2017.