JACKSON, Tenn. — We’re just hours away from the eclipse, and people from all over are traveling and making last minute plans. 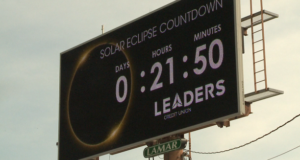 It’s all for that two and a half minutes of partial totality.

“I wanted to see one my whole life and there hasn’t bee one, so we’re pretty excited,” said Chris Lyons, a traveler from Dallas.

“I’m excited to see it, I’ve never seen a solar eclipse so its going to be really awesome,” said Caitlyn Finn.

“I think I’m really excited to share the experience with my son,” said Katie Long, a traveler from Louisiana.

It’s safe to assume by the time Monday morning rolls around, any major road in the path of the eclipse will be tied up.

“We’ve been on the road for about 14 hours for a 10 hour trip,and we have a couple hours left,” said Long.

People coming in and trying to get around, all to get the best show.

Even if their final destination isn’t in West Tennessee, Michael Welch with the Tennessee Department of Transportation says they will be driving through it.

“We are expecting high volume traffic through the weekend up until probably Tuesday,” he said.

Cliff Threadgold and his family drove all the way from California to see the eclipse in Nashville.

“Back in 2010, I was thinking when the the next solar eclipse was going to happen, and I said I have to be a part of it, no matter where it is,” he said.

By the end of the trip, Threadgold will have traveled hundreds of miles, and says he would do all over again.

“We have been planning it for a good long time, and now that were finally on the road it’s really exciting to see it all happen,” he said.

The eclipse will be here around 1:24 p here in West Tennessee.