Mickie Eugene Perry, age 84, died Thursday, August 17, 2017 at Jackson-Madison County Hospital. He was born in Paris, TN to the parents of James Walter and Ora Hicks Perry. He was retired from the U.S. Postal Service. He was a member of the Brown’s United Methodist Church singing in the choir, served as President of Coach Pitch of Dixie Youth Baseball, and was part of the Golden Bell Quartet and other quartet singing groups. Mr. Perry was a Navy Veteran and served in the Korean War. 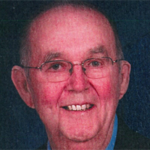