MILAN, Tenn. — Thousands of students across the state took a break from the classroom and textbooks Monday to head outside and see the eclipse. 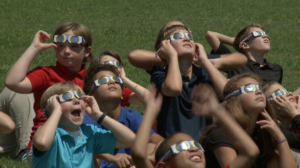 All 600 students at Milan Middle School filled the front yard as the sky darkened.

“We’re just excited to have a hands-on type of experiment where kids can participate,” Principal Chris Jones said.

Jones said they’ve been planning for the eclipse since school started.

Jones says safety will always come first, and that’s why the district purchased viewing glasses for all students and faculty.

“The younger kids will only go out one on one and will only spend a few minutes outside at the peak,” Criswell said.

After the eclipse reached its peak, students went back inside to learn more about what they saw and why it happened.

“There’s not much of a better opportunity than to actually have it going on outside where you can go out and view it and have that experience,” Criswell said.