JACKSON, Tenn. — The TBI has issued an endangered child alert for a girl missing from Jackson. 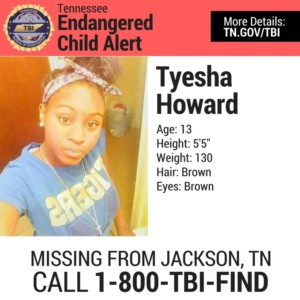 Tyesha Lashay Howard is 13 years old and has been missing since Monday morning, according to a release from the Tennessee Bureau of Investigation.

She was last seen getting into a white Toyota four-door, full-size pickup truck with a black bumper guard down the door and a sunroof, according to the release. The truck was driven by a black male in his early 20s with dreads in two ponytails and a cast on his right foot, the release states.

Tyesha is described as being five feet five inches tall and weighing around 130 pounds with brown hair and brown eyes.

She was last seen wearing pajama pants, a pink sock on her right foot and a white sock on her left foot. She had a dark blue blanket.

Anyone with information about her whereabouts is urged to call 1-800-TBI-FIND.