West Tennesseans view once in a lifetime eclipse

MILAN, Tenn. — The great American eclipse has come and gone, but the sights and sounds continue to live on in the memories of those who witnessed it. 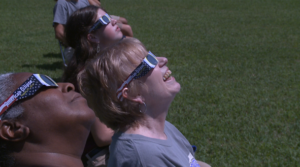 West Tennessee woke up Monday morning ready to turn their eyes to the sky.

Watch parties and events happened all over. For those who didn’t make it to one, here is what you missed.

The day started off like any other day.  But as the minutes disappeared, so did the sunlight.

People flocked to Paris Landing State Park, where they experienced the eclipse in 99 percent totality.

Thousands of students across the area took a break from the the classroom and textbooks to head outside and catch a glimpse.

Viewing glasses were purchased for many school districts, including Milan Special Schools and Jackson-Madison County.

People got the once in a lifetime view the Jackson-Madison county library, where they learned more about what happens during an eclipse.

But if you missed the fun this year, you only have to wait another seven years for the next solar eclipse.

If you were lucky enough to get a pair of viewing glasses, don’t throw them out.

Astronomers Without Borders announced a plan on it’s Facebook page to collect glasses and send them to Asia and South America for a 2019 eclipse.

West Tennessee saw about 97 percent totality in this year’s eclipse.