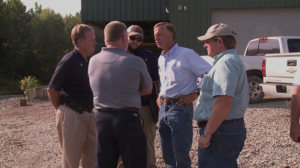 “I’m out to understand it better to see how we can help,” he said.

Haslam visited Roach Sawmill and Lumber in Savannah, one of six stops Tuesday on the statewide tour. “Agriculture matters,” he said. “It matters to our state for jobs, for feeding our people and for the entire economy.”

Roach Sawmill and Lumber accountant Brent McDonald showed the governor around their 40-person operation in Savannah, explaining how they break down logs into lumber and other products.

“I really hope he shows the importance of agriculture in our community and also how we have incorporated technology into our operation,” McDonald said.

Tennessee Agriculture Commissioner Jai Templeton said it is an opportunity to learn more about what is going on in agriculture. “They have a much clearer perspective oftentimes than we do in government, and it’s important to just be in touch,” Templeton said.

They also discussed challenges in the industry. For example, Armstrong Flooring in Jackson recently announced plans to close and lay off more than 200 people.

McDonald said the Armstrong Flooring closure will have a direct impact on their business. “I just feel like the market’s going to be flooded and possibly drive the price lower,” he said.

McDonald said the closure came up in Tuesday’s visit with Haslam. “The jobs, whether it be at a 40-person sawmill like this or a 15-person farm, are critical for us,” Haslam said.

The governor also made stops in Henderson County on Tuesday. Haslam said he visited farms in Middle Tennessee last week and East Tennessee the week before.