McKENZIE, Tenn. — A late night shooting leaves many residents in McKenzie on edge. 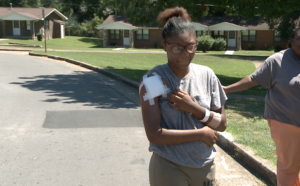 Police say there were multiple gunshots around 10 p.m. Wednesday at an apartment on Walnut Circle, leaving at least one person injured.

“We have kids out here and they shot at us. For what?” said Kayla Lassiter, who lives in the apartment.

Shamira Taylor’s 21-year-old daughter was shot in the arm. Just seconds before, her daughter was holding a friend’s 7-month-old baby.

“My son came in the house and says my daughter has been shot,” Taylor said. “It’s the worst feeling you could ever have. It’s bad enough it was my 21-year-old daughter. But it could have been a 7-month-old child, and apparently they didn’t care at all.”

Witnesses say they were enjoying the evening on their front porch when the shots came out of nowhere.

Chasidy Robinson, the mother of the 7-month-old, was on the porch when it happened. 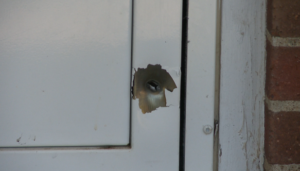 She said it looked like four or five people started spraying bullets behind the apartment across the street.

One of them hit a parked car.

“We were just sitting on the porch minding our business, and that could’ve been my baby,” Robinson said.

But with no suspects in custody, the family has one hope.

No suspects have been identified at this time. If anyone has information about this shooting, call the McKenzie Police Department at 731-352-2264.