Hymnal sing along brings out hundreds to local church

JACKSON, Tenn. — Aldersgate United Methodist church opened it’s doors  to other  churches in the area for a service to remember. 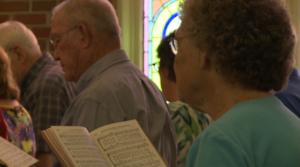 It was a night of song and praise, mixed with a little history.

“It’s music that touches your soul,” said Steve Beverly, the song leader for the church.

“I think they’re going to be uplifted spiritually, and they will have some good memories of when they were growing up and singing these songs,” said choir director Ondra Farmer.

The program used the old Cokesbury hymnal, a song book that has special meaning for  farmer.

“We’ve had several new hymnals since then, but people love the old gospel sound of the Cokesbury,” said Farmer.

Farmer says many songs from the Cokesbury aren’t in the new hymnals.

“The only way we get to sing those is to go back into the old Cokesbury hymnal,” she said.

Farmer said the song books aren’t easy to come by.

“They’re rare now, they’re hard to find,” she said. “I’ve had to call churches all over the district to find enough for us to use tonight.”

Steve Beverly lead the performance, and says the music brings back memories for many in the audience.

“It’s a time you bring back fond remembrances, and the the music is not so formal. But it is the kind I think touches so many peoples lives,” he said.

This is the first year for the Cokesbury sing along.

The choir’s next sing along performance is set for December.