JACKSON, Tenn. — A popular star shared his inspiring story of overcoming dyslexia and reaching his dreams today in downtown Jackson.

Henry Winkler spoke to a crowd of people at the Carl Perkins Civic Center. The event was hosted by the Star Center which is adding services for the first time in over a decade, including applied behavioral analysis. 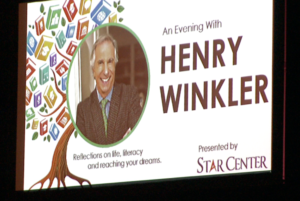 In addition to a successful career of acting, producing, and directing, Henry Winkler has published over 30 books with his partner Lin Oliver. He is an advocate for children who learn differently, and travels widely promoting change in our educational systems

They said, this evidence-based approach to changing behavior and learning new skills will greatly improve their ability to serve a range of clients.