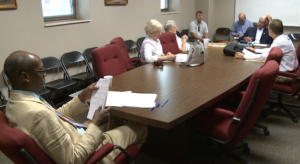 JACKSON, Tenn — Members of the Jackson City Council get a head start planning for their upcoming meeting. A lot of construction projects are on the agenda for the next city council meeting, as well as talks of whether to increase city council salaries.

As part of Governor Haslam’s Improve Act, city council members are gearing up for a $67 million project at Casey Jones Lane and the Highway 45 Bypass.

“The first thing we’re doing is eliminating that U-turn. That’s been there for years and years and years we’ve been trying to get rid of that so that will eliminate the U-turn at Carriage House and Casey Jones Village,” Mayor Jerry Gist said.

Mayor Gist says easing the traffic problems near that intersection is back on the agenda and design plans will begin soon.

“We’re very excited about the fact that we’re getting Casey Jones Village, Carriage House, all of that entire intersection re-worked and it’s going to be a big advantage to everyone,” Mayor Gist said.

Another topic discussed was changes to how drivers enter downtown Jackson. “1.7 million for the roundabout at Deaderick and Highland,” Gist said.

Council members say Ford Construction Company made the best bid, and if that bid is approved the company will begin construction next month.

“Demolishing some buildings that have to come down and then they’ll be responsible for completing the roundabout which will probably take about 1 year to get it finished,” Gist said.

Also, a five member committee will have to be created to review city council salaries. “I would really like for them to look seriously at the council salaries in order to maintain the quality of candidates who run for that office,” Gist said.

Mayor Gist said although a committee will review the current salaries that does not mean it will change. “They spend a lot of time on the job and I wouldn’t mind if the committee took a look at least being consistent with other councils across the state.”

Mayor Gist said the mayor’s salary will also be reviewed, but because it was raised four years ago he does not anticipate any changes to it.

The City Council will meet next Tuesday, September 5.