Nancy Adelia McCallister Cannedy, born on January 10, 1937 to Owen David and Helen Teaster McCallister in Little Rock, Arkansas, passed away at her home in Jackson, Tennessee on August 26, 2017. 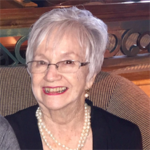 Nancy attended schools in Northeast Arkansas, and graduated from Little Rock High School in 1955. She met her future husband at that time who was leaving for Korea while at Fort Chaffee. The romance ensued long distance and they were married on April 12, 1957, upon Bill’s return from service.
They moved to Oklahoma City, Oklahoma, where their family began with the birth of their oldest son Jeff in 1958. A subsequent move and residence in Altus, Oklahoma brought their daughter Andrea in 1960, and their youngest son Scott in 1964.
Bill and Nancy’s family moved to Midland, Texas in 1965 and resided there until 1969, when they moved to Twin Falls, Idaho, and then to Jerome, Idaho in 1970. While in Idaho the family enjoyed the great outdoors with many camping trips across the Pacific Northwest. Nancy never missed any of her children’s many activities and was loved by many of her children’s classmates and their extended high school track and field families. Her home was always open and delicious food ready at a moment’s notice. She was thrifty and hardworking, and taught many gardening, canning, and other food preservation skills to be self-sustaining. She was the consummate homemaker, seamstress, volunteer including Girl Scouts, especially adoring the group of Senior girls whom she had the privilege of leading for several years.
In 1985, their son Scott became a quadraplegic while serving as a Green Beret in the U. S. Army. Nancy and Bill dedicated the remainder of their lives focused on his healthcare and well being. Thanks to generosity of friends and family supporting Scott’s care, they were able to travel to England, Ireland, Scotland, and France, as well as Tahiti, Australia and New Zealand. They greatly treasured these trips as a couple, and loved shared stories of these adventures.
Growing tired of the Idaho winters, Nancy, Bill and Scott moved to Jackson, Tennessee near their daughter Andrea and her family in 1996. They enjoyed watching the grandchildren grow up, watching their many sports and theatre activities, college graduations and their marriages. Nancy loved her children, grandchildren and great grandchildren with a fierce love and devotion.
In addition to caring for Scott, she also provided primary care for Bill, as his health declined until his death in 2014, which she handled with the ultimate of grace, dignity, and the love and respect of a 57 year marriage. Nancy then spent her remaining years successfully on her own, and was able to travel to Hawaii and Alaska on family trips. To help ensure her safety while alone, Nancy obtained her license to carry concealed handgun permit, of which her family was proud of, and often joked about, “Gramma packing heat”!
Throughout her life, in addition to being family focused, she maintained a constant relationship with Jesus Christ, and was a lifelong member of the Church of Christ. She experienced and shared the fellowship of countless Christian brothers and sisters. She firmly believed that these relationships were her life’s foundation, and saw her and her family through many hardships. After her passing, her family found her bible opened to a passage in Romans describing how to live a Christian life. Nancy was truly a godly woman as described in Proverbs 31. Her last written study notes was concluded with these words, “HE is my constant companion”.
Nancy was preceded in death by her husband Bill, and her brother David McCallister.
Nancy is survived by her son Jeff Cannedy of Tomball, Texas, Brenda Cannedy of Spring, Texas, and their children Heidi Wahlquist and her husband Mikey in Montgomery, Texas, Jared Cannedy and fiance Alejandra Silva, Joshua Cannedy and his wife Luvianca, and Hannah Cannedy Sorrells and her husband Mike, all residing in Spring, Texas: her daughter Andrea Pugh and her husband Lowell of Charlotte, North Carolina, and their daughter Rachel Powell and husband Jordan of Nashville, Tennessee, and son Kevin Pugh and his wife Brittney of Tulsa, Oklahoma; her son Scott and his wife Anita of Jackson, Tennessee, and their children Autumn and fiance Ryan Palmatier, Dominique, Megan and Zoie. She is also survived by one brother, Wayne McCallister and his wife Lea of Shalimar, Florida. Other survivors include her great grandchilren London, Micah and Eli Wahlquist of Montgomery, Texas, and 18 half and step brothers and sisters in Arkansas and California, long time family friend John Van Der Giessen of Boise, Idaho, Cynthia Mulcahy of The Woodlands, Texas, and countless church family members, especially her book club and bible study groups.
While she loved flowers, she also requested any gifts be made to Jackson Christian School in Jackson, Tennessee.
A celebration of her life will be held on Friday, September 1, 2017, at Campbell Street Church of Christ in Jackson, Tennessee at 11:00 AM. The family will be receiving friends from 9:00 AM until 11:00 AM prior to the service.