JACKSON, Tenn. — Every month, WBBJ 7 Eyewitness News will honor a winner of the Jefferson Award. 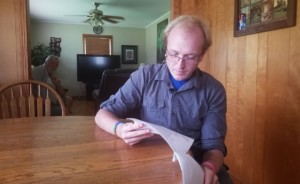 The national Jefferson Awards Foundation in partnership with Leaders Credit Union honors local people who impact others in a positive way. Honorees can range from elementary school students to senior citizens.

We asked members of the community to nominate everyday heroes who strive to make the world a better place.

Rickey Alexander of Adamsville spends his working hours helping mentally challenged adults, but what he does with his off time is even more remarkable.

“I can’t even count how many searches I’ve been on,” Alexander said.

Alexander, 25, devotes thousands of hours of his time searching for missing people across Tennessee, including Holly Bobo, Noah Chamberlin and Josh Ferris.

And it hasn’t gone unnoticed. He is the first Jefferson Award Foundation winner in Jackson, a nationwide award that represents the best of public service.

“Rickey is a very giving and caring person who puts others before himself,” Atoyia Barnes, one of Rickey’s close friends, said. “Rickey makes himself available for those people 24/7.”

When Barnes was diagnosed with head and neck cancer, doctors told her she only had a few weeks left to live. Rickey has been by her side, even setting up a prayer vigil.

“He doesn’t do it for any recognition. He does it just because of his heart,” Atoyia said. “He is just so deserving.”

Rickey says his grandmother is his driving force. She passed away in 2009 and always had a passion for missing people.

“So I took my grandmother’s life and I used it in a way that she would be proud,” Rickey said.

His parents, Barbara and Jerry Alexander, are proud, too.

“I don’t tell him enough, I am very proud of him and love him dearly,” Barbara said.

“I do what my heart tells me to do,” Rickey said. “That’s what my grandmother taught me. You always help somebody in need.”

Rickey is a Tennessee representative for the Center for Missing Persons. He was honored by the Tennessee State House of Representatives in 2013 for charity work.