“Tonight is just not a good night to be out,” Hardin Co. EMA Director Chief Melvin Martin said. “Just stay off the roads.”

According to the Hardin County Emergency Management Director, two unconfirmed tornadoes touched down in the area Thursday leaving damage behind.

“Coffee Landing Road, we had a shed that was destroyed, a possible touch down there,” Chief Martin said.

Right off of Highway 64, what was left of this storage shed was found. Scrap metal tossed around and broken pieces of wood. And a tree was also damaged in the storm.

“Out here in the Olivehill community, it appears to be a touch down of a tornado, some minor damage to some homes,” Martin said.

On Cerro Gordo Road, power lines took a hit during Thursday’s storms. Knocking down power lines and leaving debris in the road. 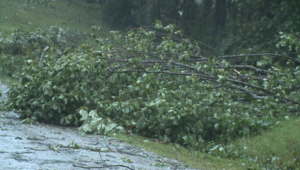 “Some power lines down, trees down,” Martin said. “No injuries or anything, no major damage.”

“Thankfully it has not been bad, but we’ve had a lot of rain,” Martin said.  “We’ve had some minor flooding. Hopefully we’ll make it through without any more serious damage but we’ve got some people without power this evening.”

Chief Martin says there was a call about a car in a ditch Thursday night. So he cautions folks to stay off the roads because roads are slick.