OBION COUNTY, Tenn. — A wreck shut down a major highway for several hours Friday in Obion County. Investigators said part of it could be weather related. 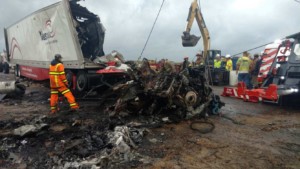 James Bruce, a driver, said the detour took him about 15 to 20 minutes. “It wasn’t any problem for me because I’m from the area,” he said.

Obion County Emergency Management Agency Director Danny Jowers said two tractor-trailers hit head-on around 2 a.m. Friday then caught fire. “One of the tractor-trailers lost control of his vehicle, traveled up over a barrier and went onto the southbound side,” he said.

Jowers said product from inside the tractor-trailers spilled on the roadway, leaving crews a massive mess to clean up. “One of them was hauling food products, hot dogs, some burritos,” he said.

Jowers said both of the drivers went to the hospital with non-life threatening injuries.

The accident happened inside a construction zone, which Bruce said is very narrow. “Well, it’s just close and trucks have a hard time,” he said.

The crash is still under investigation, but Jowers said it was raining at the time, and they believe it could be partially weather related.