BROWNSVILLE, Tenn. — Donations for Harvey victims are ramping up across West Tennessee, leading many in our community to assist those in need. 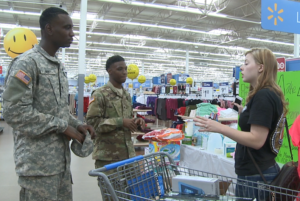 Two young men are making it their mission to provide relief for flood victims.

“I feel the pain for them, so I just want to do something positive in my community, wanted to bring my community together to be able to help, and it was successful, and I’m happy,” Delvonte Pruitt said.

Delvonte and his cousin Montravious decided to do their part in helping flood victims.

“The thing that basically gave me this idea, I had to put myself in their shoes because it could easily happen to us the same as it happened to them,” Pruitt said.

The two young men have been accepting donations at Wal-Mart in Brownsville for only two days.

“It seemed like after that first batch of donations were brought over, just person after person was coming through,” store manager Ryan Robertson said.

Both men are members of the National Guard, and they’ll head to Texas to deliver supplies next week.

“I think it’s awesome that the young people have stepped forward, our young men in uniform, Brownsvillians have come forward and said ‘let’s help our neighbors in Houston,'” Mayor Bill Rawls said.

Although Tropical Depression Harvey has passed, the aftermath of clean-up and recovery has only begun. Some shoppers said as you donate it’s important to not forget about the small towns in Texas.

“There’s other communities. It’s not just the big cities,” shopper Phylana Beshires said. “There’s other people in need down there in the smaller community that need the help desperately.”

Texas may be a long way from West Tennessee, but the Brownsville community has made huge strides to show their support.

“If it wasn’t for the city coming together, it wouldn’t have made this successful,” Pruitt said.

If you would like to donate before the men start their journey to Texas, you can visit Hibbett Sports in Brownsville from 10 a.m. to 1 p.m. Saturday, Sept. 2.

Tom Brady retires at 45, insisting this time it's 'for good'