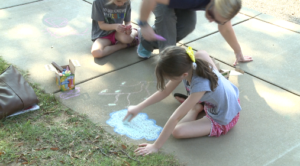 “A lot of the children are out of schools and looking for something to do over the weekend,” Peacock said. “So I decided that this would be one of the things that the library would sponsor.”

Preschoolers and adults participated in the contest, drawing just about anything.

“We’re drawing the water tower and then adding around it,” Micah Edmison, a chalk art contestant, said. “She’s got a good imagination,” he said of his daughter. “Instead of putting it on paper, we’re gonna put it on concrete.”

They separated contestants into categories based on age. Judges announced a winner Monday night.

Just around the corner, tents and vendors lined the street. 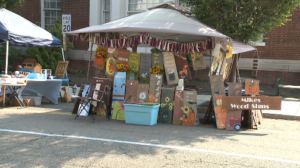 “We’re at the Makers Faire this morning,” Kelli Garner, a vendor, said. “It’s for people that make hand-crafted items and just adds a special touch to individual pieces.”

“I’m a retired disabled veteran, and I do this as a hobby and hopefully it’ll grow bigger, but right now it’s a hobby,” Michael Archey, a vendor, said.

And while most of the U.S. would be grilling out for Labor Day, people in Martin were excited to just keep it local.

“I’m going to be hanging out at the Soybean Festival with my granddaughters,” Peacock said. “They’re here from Nashville and they wanted to do the sidewalk chalk contest and then go over to ‘Magical Martin Day’ at 4 before they head home to Nashville.”

“I’m doing the Soybean Festival then going back and doing some more signs,” Archey said.