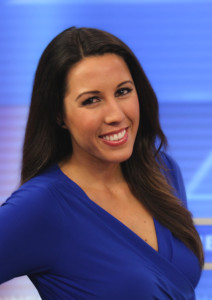 Ariana Alexa started anchoring the 5, 6, and 10 p.m. newscasts in August 2017. She created a new segment for WBBJ 7 Eyewitness News called “What’s New Wednesday” where she introduces new and local spots in the area. She also covers monthly Jefferson Award stories which honors local heroes who make a positive impact in the West Tennessee community.

Ariana was born in Kansas City and raised in San Diego, however, she considers both places home. She moved here all the way from Washington where she co-anchored and reported for the morning newscasts. There, she covered a variety of stories from President Donald Trump’s visit to numerous snow storms. She also created a number of her own segments including “The A-list” and “Hollywood Hot Topics” covering pop-culture.

Prior to that, Ariana worked as an anchor/reporter in Kansas for several years where she covered a variety of stories from chasing tornadoes to President Barack Obama and First Lady Michelle Obama’s two visits to her alma mater, the University of Kansas.

From a young age, Ariana has had a passion for entertainment news. She’s reported from the red carpet in Los Angeles and interviewed numerous celebrities at the 2016 Grammys and the 2017 Academy Awards.

Ariana has won three Emmy awards and two first-place Kansas Association of Broadcaster’s awards for her in-depth reporting. She was also featured on Oxygen’s “Snapped” and “Fatal Attraction” as a lead reporter in a high-profile murder case. Many of her stories have appeared on CNN and E! The Soup’s Clip of the Week with Joel McHale.

Ariana is happy to be in a warmer city and learn more about West Tennesseans. If you have any story ideas or just want to say hello, follow her on Facebook at @Ariana Alexa or Twitter @WBBJ7Ariana.