JACKSON, Tenn. — Police are asking the public to help identify two persons of interest in recent thefts from Wal-Mart. 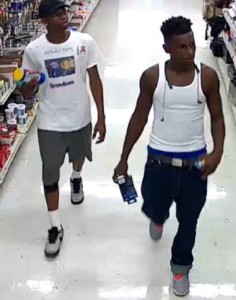 Officers are investigating the recent thefts of items from Wal-Mart on Emporium Drive in north Jackson, according to a release from the Jackson Police Department.

Two unidentified black males were caught on store surveillance video Aug. 27 taking several items from the store without paying, according to the release.