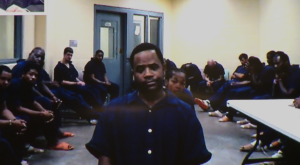 He is accused of shooting at several people Aug. 30 on Dupree Street, according to court documents.