JACKSON, Tenn. — A woman charged in a hit-and-run that left another woman dead appeared Tuesday in court. 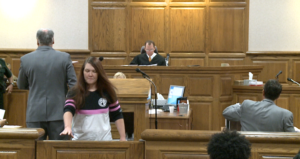 Natasha Washburn appeared in court again Tuesday. She was supposed to have hired an attorney, but when she appeared in front of the judge she still had not hired one.

An attorney was there with her and told the judge they were meeting Tuesday afternoon to decide if he would represent her in this case.

The family of Ramiza Robertson, the woman Washburn is accused of hitting with her car, were in the courtroom and said they are ready for a decision to be made in the case.

Washburn is accused of leaving the scene without stopping after running over Robertson on April 8 as Robertson walked home from work along Old Hickory Boulevard.

Robertson, 28, died from her injuries on April 27.

Washburn is due back in court Oct. 10.